What is carotid artery disease

Carotid artery disease occurs when the major arteries in your neck become narrowed or blocked. These arteries are called the carotid arteries. They supply your brain with blood. Your carotid arteries extend from your aorta in your chest to the brain inside your skull. Carotid artery plaque causes strokes because these diseased arteries are prone to forming blood clots within them. The clots can break off and float directly into the brain. A piece of plaque can also break off and travel into the brain where it will lodge into a small blood vessel and obstruct the flow of blood. It can cause the death of that part of the brain. This is called a stroke and it can have debilitating consequences. 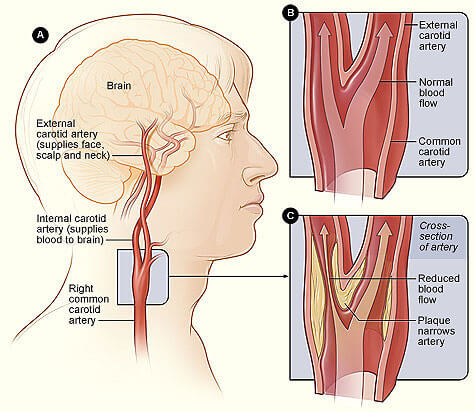 Age is a significant risk factor for carotid artery disease. Only 1 percent of adults age 50 to 59 have significantly narrowed carotid arteries compared to 10 percent of adults age 80 to 89 who have this condition. As you age, a sticky substance called plaque can build up in the walls of your arteries. As more plaque builds up, your arteries narrow and stiffen. This process is called atherosclerosis. It is a hardening of the arteries.

Carotid artery disease may not cause symptoms until a patient has a debilitating or fatal stroke. However, we work hard to detect patients who have asymptomatic carotid stenosis in order to prevent these terrible strokes from happening. In some patients, the first sign of carotid artery disease is a TIA (transient ischemic attack). TIAs are mini-strokes and have symptoms similar to strokes. However, these symptoms usually go away within a few hours and leave no residual effects. Symptoms from a TIA include:

These symptoms are very dangerous, because they often can lead to debilitating strokes. Patients with these symptoms should be referred quickly to a vascular surgeon. Surgery is often done as soon as possible.

In patients who have already had strokes from their carotid artery disease, surgery is not always indicated. However, with milder strokes, sometimes surgery is done to prevent a more debilitating stroke down the line. Your vein specialist will discuss these cases individually, presenting the risk/benefit analysis with you and your family.

Treatment for carotid artery disease depends on a few key issues: the severity of the plaque, the presence of symptoms from the disease, and your general health.

The first step in treating carotid disease is controlling some key health conditions which can exacerbate the condition. As a first step, we will work with you and your primary care doctor to control your blood pressure, your glucose levels if you have diabetes, and your cholesterol. Drugs such as Plavix or aspirin are usually used in order to decrease the risk of clot formation. Cholesterol lowering drugs called statins are often used as well. These drugs can lower risks of complications from carotid artery disease. 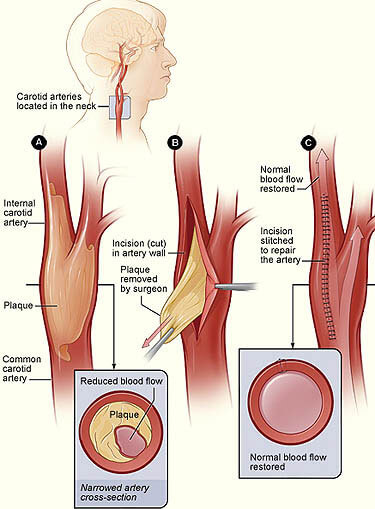 For certain patients, surgery is required. Your surgeon will discuss your specific case in detail. Surgery is typically performed if the vessel is severely narrowed or if the you are having symptoms from the narrowed vessel such as those discussed above.

Carotid stenting is a fairly new procedure for treating carotid artery disease. It is a minimally invasive procedure where a puncture is made in the groin. A long catheter is delivered to the artery in the neck using advanced x ray techniques called fluoroscopy. The narrowing of the artery is treated using a metal tube called a stent, which is placed in the narrowed vessel and expanded with a balloon. The balloon is then removed, and the stent is left in place. 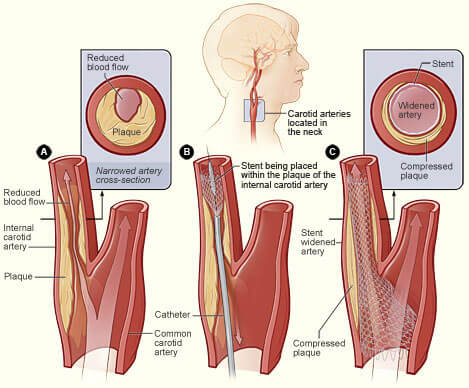 Carotid stents are effective, but the procedure also carries a certain risk of stroke. Although this is an alternative to carotid surgery, at this time, the results of this procedure are not as well studied. For now, carotid stenting is reserved for certain patients only, such as patients who are extremely sick, or patients who have had previous neck surgery, making carotid endarterectomy more hazardous.

Ultimately, your doctor will be able to discuss this option with you at length. Carotid stents have been approved for symptomatic patients considered to be at high risk for the surgical carotid endarterectomy procedure, or for patients who have agreed to participate in ongoing clinical studies designed to determine its effectiveness.